You may need to work with Sequence files generated by Hive for some table. Let’s see how we can deal with such files in Spark.

Load Data into a Hive Table

Assume we are given a TAB-delimited data file having the following content:

First move the file to HDFS and create a table on top of it (TextFile so far):

How let’s load data into a table in SequenceFile format:

You can see a sequence file created in the table directory /user/dmtolpeko/states_seq:

If you study the content of the SequenceFile, you can notice the following: 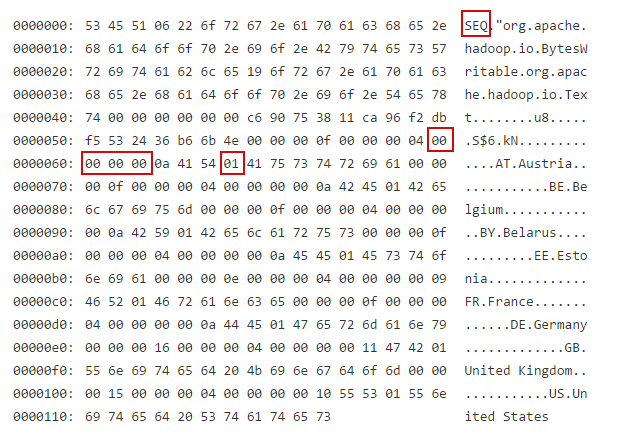 As you see an uncompressed SequenceFile looks like a regular text file, only a new Key field is added and it stores a NULL value.

Working with SequenceFile in Spark

Now we are going to work with this file in Spark. Firstly we create a RDD as follows:

Note that if the directory contains multiple SequenceFiles all of them will be added to RDD.

If you try to perform any actions on this RDD, you will receive a serialization error due to org.apache.hadoop.io.BytesWritable key:

Before you can perform any actions, you have to convert BytesWritable:

The result of execution (formatted):

You can see that the key is empty byte array (NULL value), and value contains concatenated values for all columns. Let’s get rid of NULL key and transform the SequenceFile RDD to a more meaningful key-value pairs:

The result of execution (formatted):

Once you transformed SequenceFile RDD you can use its data in reduce and group by operations as well as map-side joins.

Join of two or more data sets is one of the most widely used operations you do with your data, but in distributed systems it can be a huge headache. In general, since your data are distributed among many nodes, they have to be shuffled before a join that causes significant network I/O and slow performance.

Fortunately, if you need to join a large table (fact) with relatively small tables (dimensions) i.e. to perform a star-schema join you can avoid sending all data of the large table over the network. This type of join is called map-side join in Hadoop community. In other distributed systems, it is often called replicated or broadcast join.

Let’s use the following sample data (one fact and two dimension tables):

We need to join the fact and dimension tables to get the following result:

Now you can run the map-side join:

The result of the execution (formatted):

First we created a RDD for each table. airports and airlines are dimension tables that we are going to use in map-side join, so we converted them to a map and broadcast to each execution node. Note that we extracted only 2 columns from airports table.

This approach allows us not to shuffle the fact table, and to get quite good join performance.